Near La Junta Colorado the United States operated a Japanese internment camp. We passed it east of La Junta, but the sign did not say what it was so I didn’t stop. Next time we will check it out. 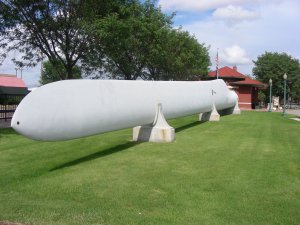 If you have ever seen the wind power everyone is talking about, this is just one of the three blades that go around. It is located at the Colorado visitor center in La Junta. Very friendly folks, will give you anything you would ever need to know about Colorado. 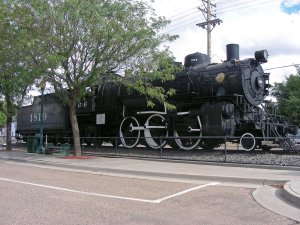 Our first RV park was a KOA off highway 50 in La Junta. Usually my last resort for an RV park is a KOA, but the folks here were more than friendly and generous since we really do not fall into an RV or a tent site, so they gave us an RV spot for much less. The park was also very nice with good showers, a pool and a large recreation room. As a bonus, a Wal-Mart was within walking distance, which we would make good use of the next morning. We discovered in the morning, that our old sleeping pads were no longer good for us. I think they worked real well when we were in our forties. Not now! Our ice chest also proved to be not camping ready, so we purchased a new air mattress and a new ice chest, both worked beyond our expectations. The truck tent turned out to not be water proof. Waking up in the morning, we noticed the tent sagging with heavy dew, just then a large drop of water hit Norm and as I was laughing, one hit me. So, we beat it out of the tent and as Norm was in the shower, the sun came up and dried the east side of the tent. We left the tent on the truck and drove at a snails pace to the Wal-Mart parking lot and positioning it to the west side, shopped for our new products. When we came out, eighty-eight dollars less, the entire tent was dry. We fired up the diesel and turned west ward.

We live and travel full time in our fifth wheel or cargo trailer. We work for the Lord Jesus Christ in Disaster Relief Ministry. When not doing any of the above we try to have as much fun as we can. Possible items you might find here, in no particular order, dirt bikes, quads, hiking, camping, desert living, building projects, stained glass projects, our family, Bible study, RVing stuff, nutrition comments, and just about anything else we can think of.... View more posts

One thought on “Day One….Oklahoma to Colorado….”